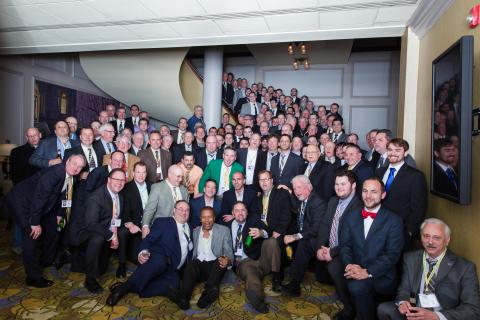 On April 9, 2016, the Epsilon-Kappa Zeta of Lambda Chi Alpha celebrated its 75th Anniversary. The festivities opened with a late-morning lunch at the Chapter House, which gave attendees the opportunity to tour the property. Next up for Brothers was a two block walk to the Church of St. Andrew & St. Monica, the site of a brief Annual Meeting followed by a Ritual Exemplification. Guests of Brothers had the option to attend a tour of the Barnes Museum. At the conclusion of the afternoon activities, all assembled at the Chapter House for an afternoon reception. The celebration then concluded at the Sheraton University City Hotel with the 75th Anniversary Banquet. The event was attended by 125 E-K’s, from EK 300 Frank Bockius to EK 1587 Chris Forsythe. Also in attendance were 2 Associate Members, 4 distinguished Lambda Chi’s from other Zetas, including the CEO of the international fraternity, Bill Farkas, and invited guests from Drexel University.